The Single Plane Golf Swing: Is It For You? 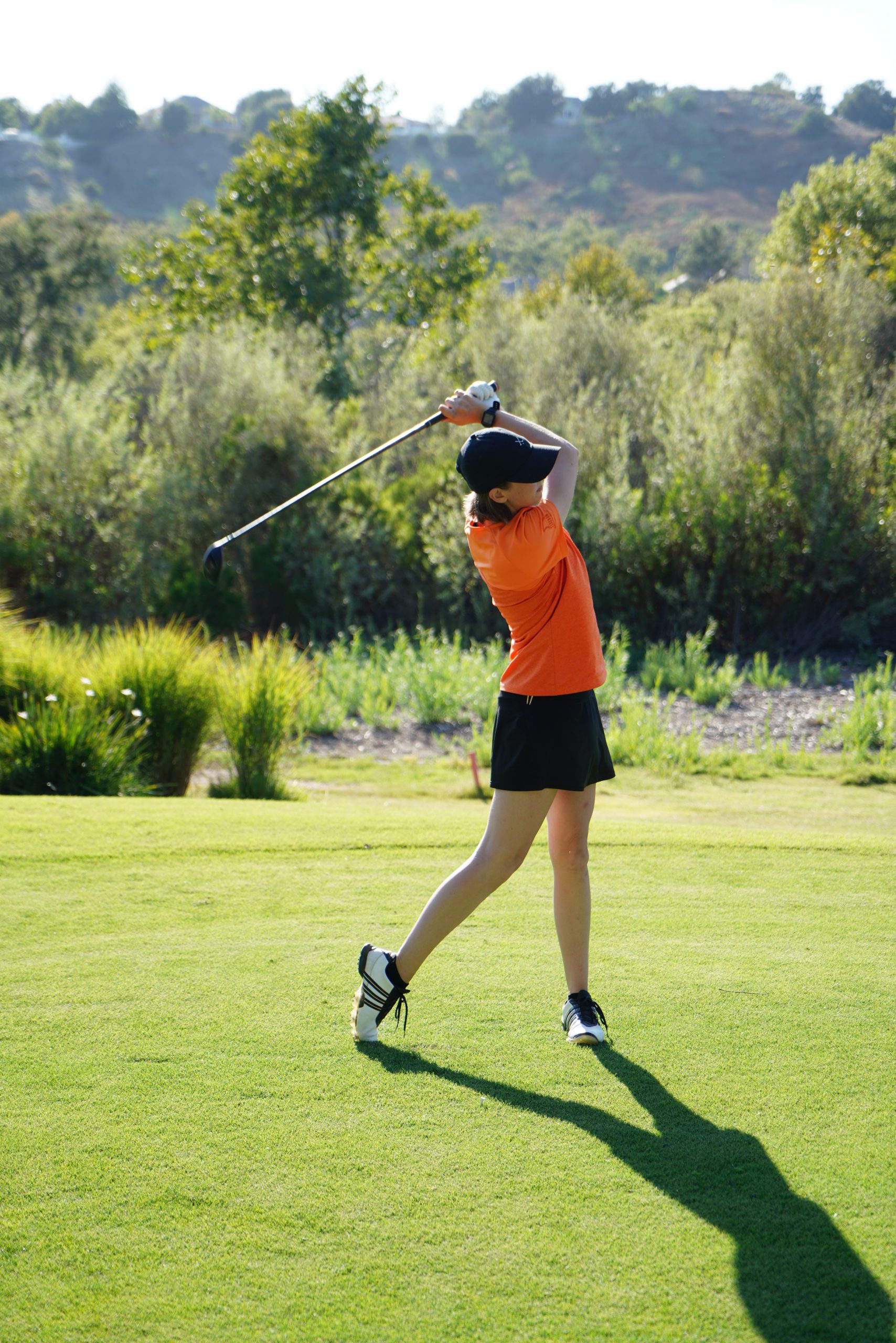 Golf is such a unique game and there are many ways to swing the golf clubs. One of the most debated topics in golf is the single plane golf swing vs. the two plane golf swing. They are rather different and the theories behind both types of swing are widely debated.

The single plane golf swing is used by many and some golfers think it’s the only way to play the game. In all honesty, you can swing the golf club along any swing plane you desire. Results will vary from one golf swing plane to another.

This single plane swing is also referred to as the one plane golf swing or the rotary swing.

Want more consistency in your game? Check out the Stress-Free Golf Swing .

What is the Single Plane Golf Swing?

Also referred to as the one-plane swing, the single plane swing is a type of swing where you take the club back on the same plane as you return it to the golf ball. For a right-handed golfer, the left arm will be positioned at the top of the backswing to match the tile of the shoulders when you view the swing from the target line.

Some golf teachers will also call the single plane swing the rotation swing because of the way the body rotates during the swinging motion.

Moe Norman is the most common name associated with the single plane swing. Sometimes this type of golf swing is referred to as the “Moe Norman way” of swinging a golf club.

It’s also taught by Jim Hardy, Ken Martin of Natural Golf, and many others.

Many have adopted this Norman’s swing because of how good a ball-striker he was. As one of the game’s greats, Moe made the single plane swing popular, even though a two plane golf swing is more popular.

The Path of a Single Plane Golf Swing

When you are facing the golfer, standing behind them, or looking down the target line, you will see a single circle if they are using a single plane swing. The path will follow the target line pretty closely and will be the exact same on the way back as on the way through.

Imagine taking a large hula-hoop and positioning with the bottom of the hoop at the ball position. If you tilt it back over and line up the side of the hoop with the ears of the golfer, you will be pretty close to the swing path for a single plane golfer.

The plane of the swing will vary from one golfer to another, however. With some golfers, the hula-hoop may be more around the shoulders or even the body, while for others it may be taller and less tilted. It really depends on any physical limitations they may have and how they prefer to swing.

The Path of a Two Plane Golf Swing

The more common swing in golf, the two plane golf swing will often start with the club going to the outside of the golf ball on the way back. The golfer will return the club from the inside making more of a figure-eight motion.

A proper two-plane golf swing will return the clubhead from inside out allowing for a draw to be hit by the golfer. This type of shot will increase distance and accuracy when hit correctly.

Of course, there are variations to the two plane golf swing. It’s almost always taught as an outside backswing and an inside downswing with an inside out motion at the moment of impact to hit a draw.

It’s also possible to take a straight or close to straight path back and an inside or outside path on the way through the ball.

For many golfers, a single plane swing may help eliminate errors in the swing. It can help gain more control over the golf shot and allow golfers to simplify their swing.

Benefits of the Single Plane Swing

The single plane swing comes with plenty of benefits, even though it’s not preferred by most professional golfers. The best golfers in the world typically use a two plane golf swing starting the clubhead to the outside of the ball and returning it through from the inside.

Golf is a game of muscle memory. This swing is filled with moving parts. When you want to score better, you have to make your missed shots better.

A golf swing you can easily repeat helps make you a more consistent golfer. When done correctly, it’s pretty easy to move the hips, shoulders, arms, and hands along a single plane swing. You won’t need any special movements, such as the wrist hinge or a hip thrust to drop the club into the right position on the downswing.

The single plane swing doesn’t require nearly the same motion and for many golfers, it’s much easier to understand.

When performed properly, the single plane swing will create a consistent draw shot. The arms and shoulders will be on the same plane naturally, which will provide a flatter plane with the club arching around the golfer’s body.

If you perform this type of swing properly, it will create a swing that will have you hitting the ball slightly from inside the target line. You’ll end up with a slight draw, which is the preferred shot for most golfers.

Fewer moving parts are often a good thing for amateur golfers. When you choose to adopt a single plane swing, you will eliminate most of the rotation found in a two plane golf swing.

Ben Hogan and Moe Norman were known as two of the best ball strikers to play the game. They both used a single plan swing and it certainly provided plenty of benefits to their careers.

For most average golfers, adopting a single plane swing will allow for better contact with the ball. This will also produce other benefits, such as more accuracy and more distance.

How to Learn the Single Plane Swing

At address, a two plane golf swing will have a narrow stance with the lead arm on a different line than the clubhead. It’s a different position than the actual impact position.

A single plane swing will have the hands positions in front of the clubhead and it will be very similar to the impact position. This position is known as the rod and it positions the club and arms in a straight line similar to the position at impact.

A two plane swing will take the club back to the outside of the target line with a wrist hinge and the shoulders doing most of the work. There are many moving parts in this type of backswing.

A single-plane swing will start the backswing by moving the club directly along the impact plane on the way back. This type of golf swing will maintain the relationship of the lead arm and lead shoulder making it easier for the club to follow the single plane to the top.

Top of the Swing

The conventional golfer using a two plane swing will need to drop the arms into the slot at the top of the golf swing. This requires quite a bit of shoulder rotation and the spine will move towards the target in a bit of a reverse “C” position.

The golfer using the single plane swing will not need all these moving parts. Instead, the lead arm will sit directly on the shoulder line and the spine tilt or spine angle won’t be altered. The main thing that has changed is a full hinge of the wrists has been established. You won’t need to drop the right elbow into the slot as you do with a conventional swing.

The more common two plane golf swing requires a hip bump and a rotation of the lower body on the downswing. The trail elbow has to stay being the trail hip slightly and the arm could become trapped behind the body. This may lead to inconsistencies.

A single plane swing doesn’t need all this movement. Instead, the head remains behind the ball and the trail foot on the ground as the spine tilt is maintained. The lead leg will remain stable and flexed and the same plane the golf swing started on is the same plane the club will return down. There’s no body movement to make room for a steeper plane through the downswing.

The most important position will see a two plane swing finding impact from a steeper plane angle than address. A single plane swing will return to the same shaft plan as the swing started with to create the perfect impact position.

The best drill for learning the single plane swing is known as the horizontal golf drill. This drill will help you learn the correct plane for this type of golf swing and help you avoid hitting bad shots.

Use your seven iron for this drill and start by addressing the ball as you normally would. Stand straight up and grip the club away from your body at should height. You’ll want to make sure the clubface is square to the target and your trailing arm is aligned with the club shaft.

Turn your body to the right with the arm and shaft aligned and turn your wrists as you go back to a full hinge. Now, turn your body through the forward swing while rolling your wrists over to make the clubface square with your target at the mid-point of the swing.

You need to keep the trailing arm and the club shaft aligned throughout the impact position if you were hitting a ball. This drill will finish the swing in balance with your body towards the target.

If done correctly, this drill will help you get a feel for the single plane swing.

Another good drill for learning the single plane swing is the noodle drill. This drill requires a swimming pool noodle and a broken shaft or orange stick (alignment sticks) used to mark curbs during the snow (found at a hardware store).

Now, grip a golf club and try to take a swing. If done correctly, when you bring the club back, your hands will pass just below the noodle. If they don’t, the noodle will provide instant feedback and you can make the correction. Anytime you come over the top as you learn the single plane swing, this drill will have you whacking the noodle.

The single plane golf swing is a nice option for frustrated golfers who want to play better golf on the golf course. For some golfers just starting out, it can be a more natural golf swing than the two plane swing.

If this seems like a swing for you, try it out on the driving range and see if this is a swing that will help you drop your scores on the golf course.