Physics of a Golf Swing: Here’s What the Science Says 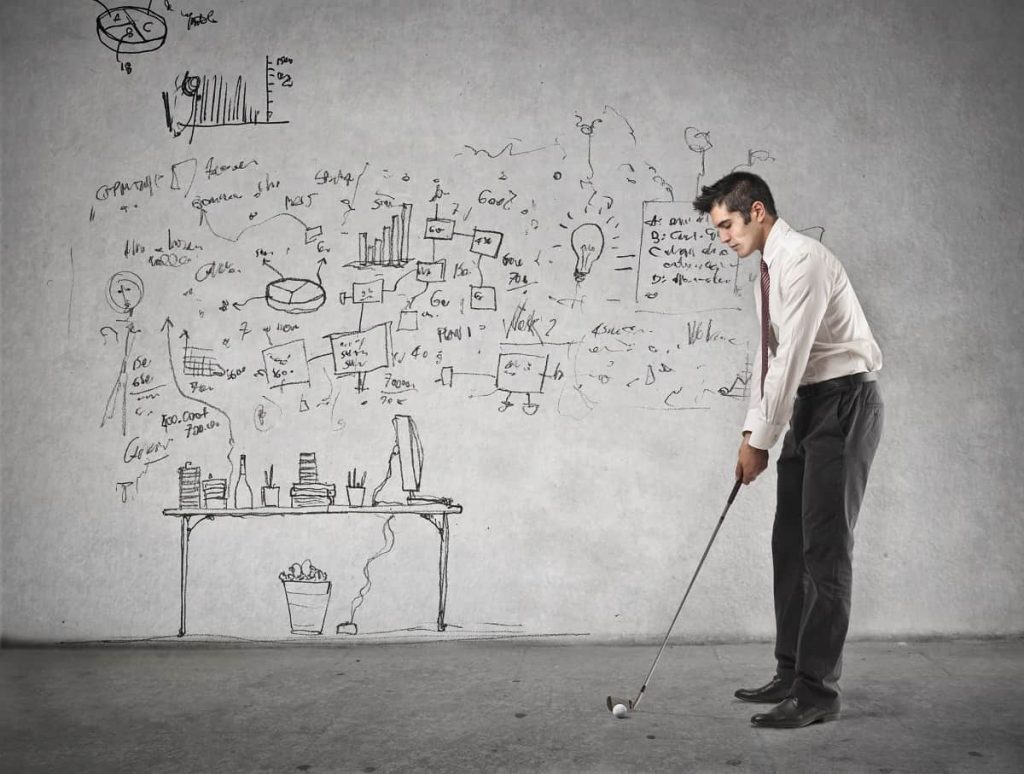 Golf is one of the most entertaining and complex sports out there. Yes, it may not be as physically demanding as basketball, but believe us, it puts your body and mind to work like no other sport does. In the past few decades, its popularity has been on a steady incline. This is mostly due to the fact that golf equipment is not as expensive as it once was.

Now, if you are just starting out, we understand that you might be eager to get on the golf course and take your first few swings. Still, we would suggest that you don’t rush the process and instead sit down and enjoy reading a bit about the physics of a golf swing.

Considering the fact that any golf swing is mechanically complicated, you can benefit from understanding the fundamentals that lie behind it.

You are probably well aware that physics is behind everything. This is why we have decided to discuss the matter by providing you valuable information on how impact, spin, and aerodynamics works. Thus, if you are interested in getting certain scientific tips on how to improve your golf game, we suggest you read on!

Want more consistency in your game? Check out the Stress-Free Golf Swing.

Introduction to Physics of Golf Swing

Being profound in physics can not only make your daily routine much easier but also help you improve your sports performance. There are a number of scientists and emeritus professors, including Dewhurst, who focused on the physics behind some common golf movements.

Dewhurst’s personal focus was set on the aerodynamics of ball flight, as well as how the impact between the club head and the golf ball works. Additionally, being able to hit the ball with an intentional curve is also predisposed by the popular Law of Inertion. Bearing this in mind, getting into the matter seems quite interesting.

The first thing that popular physics focuses on is the transmission of energy from your body to the golf club. It is a fact that anyone who is physically strong enough can generate enough power to hit the ball. Still, this is not the idea of the perfect golf swing. It is much more complex than focusing on the rushed movement of hitting the ball.

You should be aligning the body and doing everything in your power to create as much energy as possible with a smooth, deliberate movement. The key lies in stability. Thus, instead of trying to exceed your physical potential, physicists suggest that you transfer the energy to the club.

Not only that, but you should consider that the flight of the ball is not solely determined by how hard you hit it. The ball’s flight is greatly predisposed by the common laws of aerodynamics. Thus, you will need to focus on creating the perfect launch angle.

The angle shouldn’t be too low, but it shouldn’t be too high, either, as that may result in a ball that is driven far away from the target. Now that we know that aerodynamics lies behind the ball launch, it is no surprise that many amateurs have issues with mastering this concept.

Another important thing is the tempo that lies behind the swing. As you are probably aware, tempo is defined as the elapsed time between the takeaway and the finishing motion. The main issue that is strictly related to the laws of physics in regard to speed is how most golf players swing the club.

From what many professionals suggest, you should be aiming for a 3:1 ratio. This means that you should spend 3 seconds with the backswing for every 1 second on the downswing. Thus, instead of rushing through the first step of the movement and wasting your speed, it should be at its peak when the clubface makes an impact with the golf ball.

Talking about the golf ball, it is important to notice that the PGA tour has introduced balls that have a higher percentage of urethane. As physics suggests, this element carries a high potential of spin.

The fact that these balls skid the clubface better increases the spin coefficient of restitution and, in the long-term, the potential of an intentional curve. It is the spin-skid condition, as the physicists call it, that makes it look like the ball is jumping from the clubface.

Now, going deeper into the radius, diameter, and other elements that are related to the swing and impact would be interesting. However, our goal is not to confuse you with a lot of technical discussions. That is why we have prepared a couple of tips that are based on scientific studies on the physics of a golf swing.

The fact that a golf swing does not consist of just a single movement implies that it is fundamental to be aware of the physics behind it. Here are a couple of the most important points that we think you should be focusing on.

How you aim the clubface greatly affects where the ball will land. As a beginner, you might think that the harder you swing, the further the ball will go. Unfortunately, that is not true. Depending on what kind of shot you want to make, you will want to go for certain alterations in positioning the clubface.

For a straight shot or a draw shot, you will want to have the clubhead square with the ball. By doing this, you will be setting the clubface 90 degrees from the target line. Then, you will be able to transfer all of the energy that you have created into the clubhead and to the back of the ball.

We understand that mastering this may be quite tricky. That is why we always suggest that you see the back of your left hand as the clubface. Thus, by positioning it square to the ball, you will be able to maneuver the club and avoid losing power. Remember, the idea is that the generated speed is released at the point of impact and not before it.

As mentioned above, the tempo of your swing is of the utmost importance when it comes to where the ball will land. Thus, do not waste your energy and rush through the backswing movement. Instead, you should count to three and ensure a smooth transition at the beginning of your takeaway.

Then, you should accelerate as you move closer to the downswing. Make sure that the most speed is released as the clubhead goes through the ball. That way, you should manage to drive it along the desired path and ensure that the ball lands close to the target.

If you accelerate after the ball is in the air or during the backswing, you will be wasting energy. Meanwhile, the ball will be directed by other forces, including the wind.

Aligning your body, arms, and feet plays a huge role in the golf swing. The best exercise for understanding the importance of a straight arm is to fill a bucket full of water. Extend the arm and swing it to the left and right. You will notice that the water stays inside the bucket.

How does this happen? This happens with the help of centrifugal force, which is generated by the optimal positioning of your arm. If you were to fold it and swing the bucket or focus on using your elbow or hands instead, the result would be the opposite.

You want to profit from the positive impact of centrifugal force. Thus, you will want to lead with your front arm and make sure that it is extended all the way through the backswing and downswing. This way, you will allow the bulkiest part of the club, which is the clubhead, to be driven away from the shoulder. It will then level out at the end of the downswing.

We have already discussed this as one of the elements responsible for increasing the distance of your shot. You can go for clubs that have large clubheads and allow an array of different launch angles. While you can choose between level, downward, and upward, most professionals decide for the latter.

The main point that you should consider is the speed of your swing at impact. If you are hitting faster than 110 mph per hour, a launch angle of 14 degrees seems to be optimal. For those of you that are below the mark of 105 mph, you should be going for 16 degrees and above.

Considering the fact that the law of physics determines any action and reaction, how this affects a golf swing is no surprise. We did our best to keep things easy to understand no matter what level you are at, and provided a few tips that are based on studies done by physicists.

Analyze these thoroughly and, once you feel ready, get on the golf course and make us proud! We know you can do it once you have put the time and effort into your process.