How to Swing a Hybrid Golf Club: A Detailed Guide + Tips 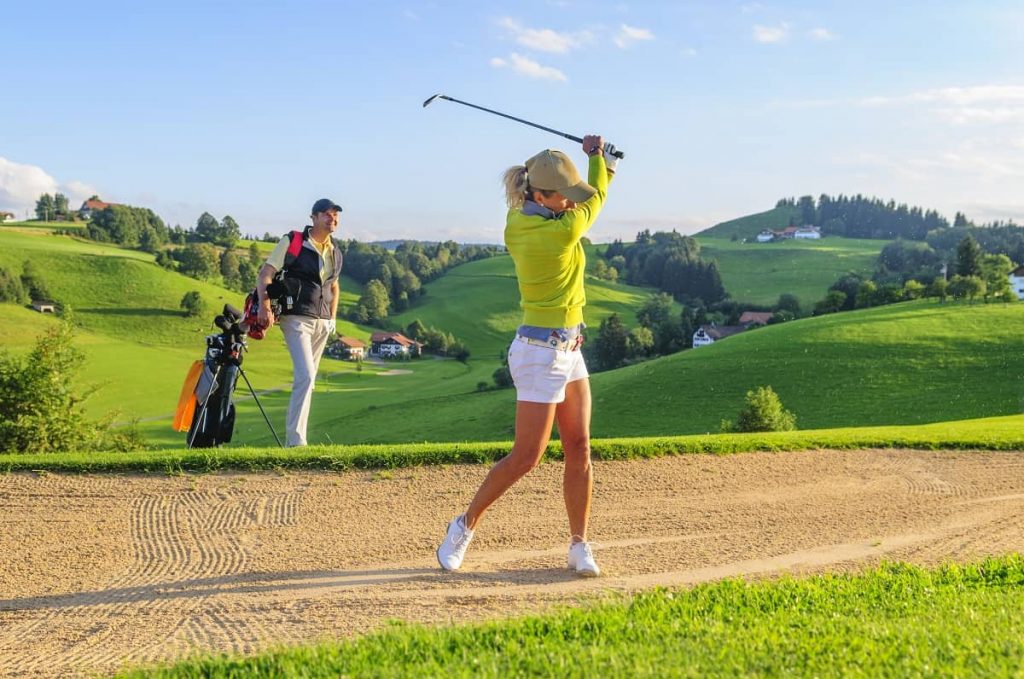 This is a type of club that is versatile and possesses the features of both a fairway wood and an iron. Hybrids are supposed to be replacements for your irons that are long, but you can also use them to tee off. When you use a hybrid in place of a long iron, you have to hit your ball in the manner in which you would swing a long iron.

When using a hybrid to tee off, swing in the manner in which you would swing a fairway wood; however, the ball should be kept lower.

The Vitality of a Hybrid in the Set

Why does your set need a hybrid? Hybrids are versatile and easier to hit. These are the reasons why a hybrid should be part of your set:

Among the several clubs you can use, long irons are said to be the hardest. This is the reason why the invention of hybrid clubs is good news for golf players. Compared to hitting 2-3-4 irons, hitting a hybrid is easier. For them to replace the long irons, hybrids come in degree loft options of 18, 22 or 24. They are necessities for beginners. It is of no use to cling to long irons when hybrids are around.

Due to the wide souls, heavy heads, and long shafts of fairway woods, beginners usually have a rough time controlling their shots. The introduction of hybrids has changed this as it has made the game more enjoyable by eliminating some of the previous issues. Hybrids make it easy to hit, are shorter, and even lighter. This is why they have replaced 4, 5 and 7 woods.

It is less stressful to hit a hybrid compared to other clubs. This is because their sweet spot is larger, and their shaft shorter. This allows you to be in total control. Hybrids will instill the confidence in you to handle anything the golf course throws your way.

How Do You Swing a Hybrid Golf Club?

Due to their versatility and extra forgiveness, hybrids are ideal for budding golfers. However, even experts in the game will need some adjustments, particularly if they are hitting with a hybrid for the first time. Below are tips professional golfers will give you to hit the hybrid accurately:

Most golfers make the mistake of swinging hybrids in the same way they would swing the wood shot. A hybrid club may resemble a fairway wood, but you have to hit it as if it were iron. This should not be so hard because the shaft length of an iron is just a few inches shorter than its hybrid counterpart.

For you to be able to do a hybrid shot that is standard, you have to make adjustments to your stance. Also, make sure your weight is concentrated at the center. Your shoulders, feet, and hips have to be square to your target.

Your ball and hands have to be on the same line. Usually, when using a fairway wood, you would use a sweeping motion. Don’t do that here. Instead, use the descending strike as you hit the ball in the same manner you would when you use a 5 iron.

As you hit through your ball, emphasize moving the right side of your body. End the swing with all your weight concentrated to the left leg.

In golf, a draw or rather a draw shot is a situation that will need you to generate a ball flight that is lower and whose course curves to the left direction. The curve direction depends on the golfer’s dominant hand. For right-handed golfers, a draw shot will mean that the flight path of the ball will curve in the left direction.

Consequently, for left-handed players, a draw shot will mean that the flight path of the ball will curve in the right direction.

Right-handed players can do the draw shot using a hybrid by aiming the club face in the direction of the target. They, however, should be at a closed stance — the hips, feet, and shoulders have to point towards the target line.

Another way to do it is to use a normal stance. However, during the address, your club face should be closed. What this means is that for right-handed players, the club face should slightly point in the left direction of the target line.

To be able to use a hybrid on a fade shot, just aim the club face in the direction you want your ball to land. Just do the normal swing. Your body should, however, point in the left direction of your target line. When hitting through the ball, ensure your right arm does not turn over the left. Also, try and keep your clubface open.

Have a Narrow Stance

A narrow stance will make it easier for you to unleash that descending blow. It will also reduce the occurrence of thin and fat shots.

Do Not Place the Ball Too Far Away

Doing this will create difficulties when hitting it and therefore spoil your swing. This is the correct positioning of your ball: With the hybrid’s toe lying against the left heel with its face pointing in the direction of your body, the ball will lie in the opposite direction of the hosel of the club.

When it comes to holding the hybrid, treat it like a long iron. Do not hold it too tightly so as to put pressure on your arm. It is also important to press your hands gently and lean on your left side to achieve the desired posture.