How to Stop Shanking Your Golf Shots 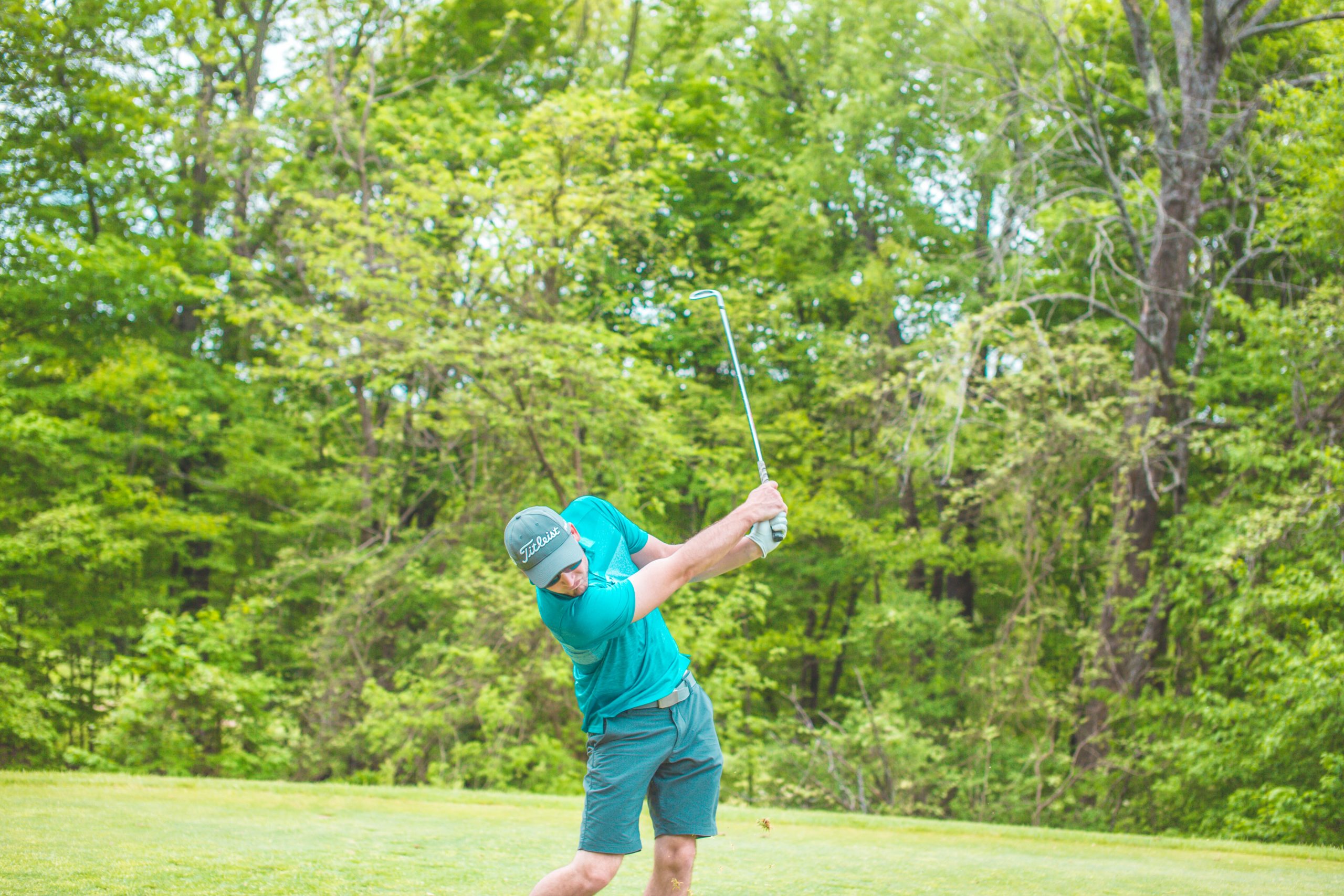 There is nothing worse in golf than catching a case of the shanks. When you don’t know how to stop shanking your golf shots, the game loses its’ luster and becomes a chore.

However, when you have a good understanding of how to get rid of the shanks, you can enjoy the game once more.

No matter how bad the shanks have become, there are certainly ways to get rid of them. Even if the word “shanks” has become equivalent to a few choice four-letter words in your circle of golfers, you can certainly fix the issues.

Tips and Drills to Stop Shanking Your Golf Shots

Have the shanks caused one of your golf clubs to go flying out of your hand and into a nearby tree or pond? Has your face become red with anger causing you to consider hitting a putter off the tee because you can’t stop shanking the golf ball?

Most golfers can sympathize as most of us have caught a case of the shanks before. As much as they seem like they are a disease, the shanks are not contagious. You may need to remind your golf buddies of this as they may start “social distancing” themselves from you if you have the shanks.

What is a Shank Golf Shot?

Just in case you’re not familiar with this ugly, disgusting golf shot, a shank is the most dreaded of golf shots. The term shanking refers to mishitting the ball and watching it go close to 90-degrees away from your intended target.

This type of shot is caused by hitting the ball on the hosel or heel of the club. Some golfers refer to shanks at hosel rockets due to the nature of the ball flight and where you strike the ball on the club.

Not only can this type of shot cause your scores to balloon, but it can also be rather embarrassing. It can even become dangerous as you lose control over where your golf ball is going.

For the right-handed golfer, the ball will shoot off to the right side, usually very low and very fast, much like a low line drive in baseball.

7 Top Tips for Eliminating the Shanks from Your Golf Game

The first step in fixing any issue in golf is diagnosing the problem. With the shanks, it’s pretty easy to figure out as this type of shot is rather unique and ugly.

However, you may be hitting some decent shots in between ugly shanks. You can diagnose the issue by using a foot powder spray or another type of spray on the clubhead. Then, when you hit the ball, it will leave a mark and you may find even the best shots you’re hitting are closer to the heel of the club and not the toe.

The quick fix, if this is the case, maybe to simply line up with the ball at the toe of the club before you swing.

You can also use a marker and a large dot on the ball as a way to see where you’re hitting it. Just put a dot on the ball and face the dot towards the clubhead when you line up for the shot. Then, when you strike it, a mark should be left on your clubface where you hit it.

Of course, the goal is to see the mark on the sweet spot. However, if you’re hitting shanks, you’ll likely see your decent shots towards the heel of the club and the shanks will likely mark the heel or hosel of the club.

Shanks are often caused by moving too close to the ball during the downswing. Remember, it only takes an inch or less to throw off the entire shot and turn it into a shank.

One of the things you can do to help avoid the shanks is quiet the lower body. Sometimes, too much lower body movement causes you to move too close to the ball and hit the ball closer to the heel of the club.

3. Back to the Target as Long as Possible

When the shanks sneak into your game, it’s usually while you’re on the actual golf course. There’s very little you can do since you cannot bust out a drill in the middle of a par five.

However, you can change your focus. If you focus on keeping your back to the target as long as you possibly can, through the swing, you’ll likely hit better golf shots. This will help you achieve the proper hip bump and help to keep your weight distributed properly through the ball.

Sometimes, the shanks become a part of your golf game due to tension. If your forearms feel tight or you notice you’re gripping the club like you’re trying to strangle the life out of it, you may have too much tension in your forearms.

Shanks go from one bad shot to a second bad shot to a mental block you simply cannot shake. They get stuck in your head and it can be hard to shake them from your thought process.

If this is the case and you’re in the middle of a round, ditch the pre-shot routine and just step up and swing. Don’t even think about the shot. Just step up, take aim, and swing away.

Sometimes, just by eliminating the thinking, you can get back to hitting good golf shots. If this works, do it a few more times until you’re not thinking about the shanks anymore. You can even continue until the round is over and then hit the range with your normal pre-shot routine.

6. Flex Your Toes to the Sky

One of the biggest reasons golfers start to shank is moving their body towards the ball during the downswing. By flexing your toes to the sky, you can weight will start further on your heels, which will help prevent you from moving too far forward.

It will certainly feel odd, but when you’re in the middle of a round, you need something you can do to help eliminate the shanks. After all, you just shanked one off the tee of a par three and watched it bounce around on someone’s roof.

7. Move Away From the Ball

Another tip you can use on the golf course, which works great if you’re shanking drives, is moving away from the ball. If you move further away from the ball and line up with the ball on the toe of the club, you may be able to stop shanking.

You should almost feel likely can’t possibly reach the golf ball. The only problem with this tip is it’s a Band-Aid fix. It will help you finish a round without shanking as much, but it won’t take the shanks out of your golf swing.

Instead, it will use the motion you are creating to hit the shank to hit the ball on a better part of the clubface.

Most of these tips can help you eliminate the shanks while on the golf course. However, as soon as you get done with your round, it’s best to hit the range with one of the drills below to get rid of the shanks for good.

One of the best ways to learn how to stop shanking your golf ball is to head to the range and build your confidence back up. Often, if you can see many good golf shots at the range, it will help clear the shanks out of your mind.

1. Ball Under Your Toes

One of the easiest drills you can use to help fix the shanks is putting a golf ball under the toe of each foot while hitting shots at the range. This drill will help keep you from moving forward during the downswing, which could be causing your shanks.

It may take a few range sessions with this drill to truly get rid of the shanks, but it does work. It’s a very popular choice and when you return to actual play, just focus on creating a good impact position.

Before you try this drill, make sure you don’t have anybody around you as it can become a bit dangerous. Simply put a second golf ball next to the ball you plan to hit (on the outside of it) about an inch away from the ball. Then, hit golf shots as you would normally.

The barrier ball will help keep you from moving the clubhead and hitting the ball on the heel of the club. If you move the clubhead, you’ll hit both balls instead of just one, so you will know you didn’t do it correctly.

You can also use a shoebox instead of a second golf ball. This drill can also help those struggling with an outside in swing path, usually resulting in a large slice or fade.

Another great drill for curing the shanks is called the Hosel Rocket Drill. Tee a golf ball up with a long iron and place the hosel or heel of the club across the ball when you set up.

Now, when you swing, the goal is to intentionally miss the golf ball to the inside. This will help to promote the property inside-out swing path and will help you hit better golf shots. Repeat this drill several times, and then address the ball as you normally would and hit a normal golf shot.

Practice this drill often and you’ll create a better inside-out path, along with curing the shanks once and for all!

4. Sit on your Clubs

It seems like an odd drill, but it will help you check your hips and make sure they are in the right position through the swing. If you have a stand golf bag, you can set your clubs up behind your address position and put your right cheek on the headcover of your driver when you start the swing. As you swing through the golf ball, you’re left cheek should end up finishing on the same headcover.

This drill will help you stay back and keep your hips in the right position as you move through the golf ball. Practice this drill with shorter shots and a shorter swing. It’s harder to do with a full swing, but with a three-quarter or half swing, it’s a pretty good drill to help cure the shanks.

One of the ways you can start to cure the shanks is to go back to the basics. Start with the chip shot and graduate through to the full swing. You can even do this with one or two of the other drills on this list.

When you start with a good chip shot using a proper impact position, you can teach your muscles what that feels like again. Once you’ve hit many chip shots without any shanks, graduate to a short pitch shot.

You can also think of your backswing as a clock with 6 o’clock at the ball. Start by swinging back to 7 o’clock (a chip shot) and graduate to 8 o’clock, 9 o’clock, and so on.

This drill allows you to maintain control as you have a shorter swing to work with. It will also help build your confidence as you start to see and feel good golf shots again.

When you get a case of the shanks, it can feel like the end of the world. There are plenty of ways to learn how to stop shanking your golf shot. Try the drills and tips above to see what works for you.

Most golfers will find one or two drills and a couple of tips for the course is all they need. Sometimes, it’s as simple as using one of the tips as a focal point on the course since the shanks can become a mental issue very quickly.