How to Cure a Fade Golf Swing 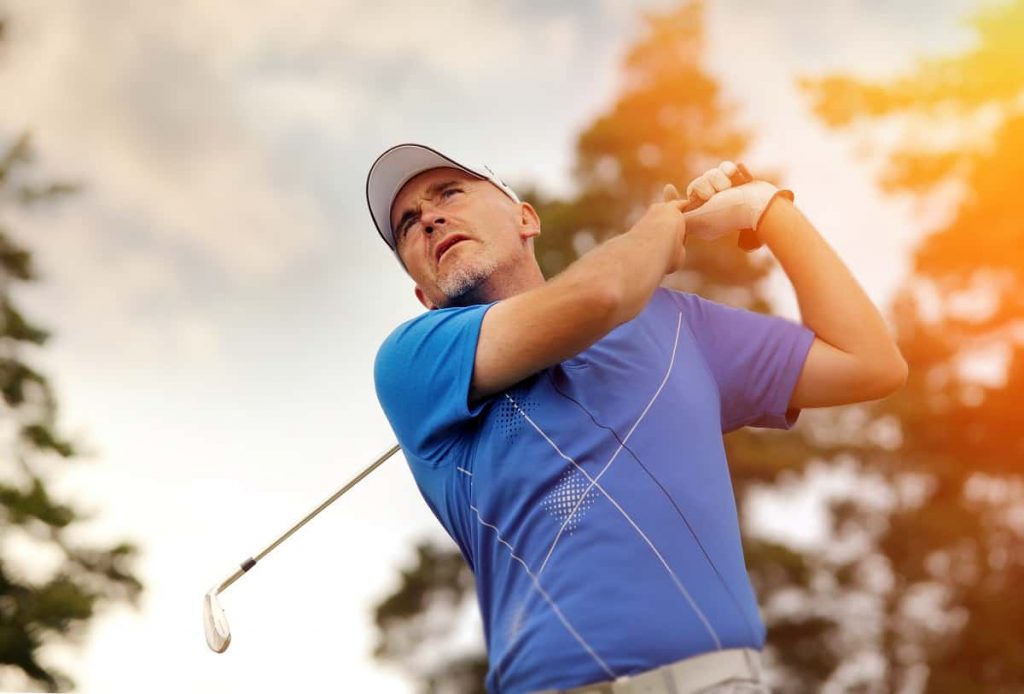 Golf is a beautiful sport that will not only engage you physically but mentally, as well. It requires calmness, mental focus, and synchronization between the upper and lower body. Perhaps you are a professional golf player, or maybe you are hoping to become one, or maybe you simply enjoy golf as a hobby.

Either way, you should know that a golf swing is a complex move that involves much more than hitting the ball. There is a myriad of different shot types. One shot may be suitable for a certain scenario, but that same shot may not work well if the target is positioned differently.

One of the most beautiful and efficient shots in golf is the fade. This is, of course, if it is done correctly.

Unfortunately, even professional players need a lot of practice before being able to master the mechanics of this shot. A proper fade golf swing will send the ball slightly to the left and then turn it back to the right, hopefully straight to the target. An ill-fated fade will probably result in the ball flying right into the pond, bunker, or rough.

In order to avoid this type of stress and maximize your performance, we have prepared a couple of tips on how to cure a fade golf swing.

You can also eliminate fades and other swing issues from your game with the Stress-Free Golf Swing. It’s helped thousands and it can help you too.

What Is a Fade Golf Swing in the First Place?

Before we can discuss the different methods of curing or turning your fade shot into a straight shot, we need to define it. First, we will be discussing the intentional fade. As mentioned above, it resembles regular slice shots. However, the ball flies to the left first, only to curve back to the right and straight towards the target. Keep in mind that this is the definition for a right-handed golfer.

For someone who considers their left hand as the dominant one, the main curve will be to the left. The main difference between a fade and a regular slice is that the latter is much more visible. It doesn’t feature a gentle curve, which is common for the fade/cut shot.

How does fade happen? The flight of the ball is impacted by a clockwise spin. In most cases, this is due to an open clubhead at the moment that it makes contact with the golf ball. Another common cause is if you allow the clubhead to slightly swing left/right when the impact happens.

When would you want to use a fade shot? It would be useful when there is a bunker or a pond in front or next to your target and you want to avoid the risk of messing things up.

Keep in mind that professional players like the fade. Of course, they have invested years of practice into this shot, making it look effortless compared to a cut shot played by a beginner.

If you are interested in intentionally making the fade shot, then there are two good ways to do it. The first one is to open up the clubhead in order to give the ball a clockwise spin. Also, if you would like to keep the clubhead square, then you can simply position yourself differently.

Thus, instead of keeping a semi-closed stance at the moment of impact, make sure that your hips are completely open. This should allow you to achieve a gentle curve and go over or avoid troublesome elements, including hanging branches and bunkers.

This is all fine, but what if you don’t want a fade shot and it still happens? If that is the case, you might want to readdress your stance. Make sure that your shoulders, hips, and feet are properly aligned. Also, unless you want the gentle curve to happen, you will not want a completely open stance at the moment of an impact.

Another important element is a weak grip, as this is one of the main causes of a clockwise spin. Last but not least is ensuring that the club head is square with the golf ball.

Avoid Hitting a Fade in Golf

In most cases, the cause of an unintentional fade is found in the mechanics of your swing. If you are currently not able to hit a shot like this on command, then being able to avoid it is a good start. When will you need this skill? Imagine that a pond is to the right or left of the target (depending on your dominant hand).

If you are not able to hit the perfect cut shot, then there is a huge risk of the ball ending up in the pond. As already mentioned, you should focus on hitting the center of the ball instead of the inside in order to avoid a clockwise spin.

What you want is to turn the fade shot into a draw. How do you do this? There are two things that you will need to focus on. The first one is that your swing to the right/left side (once again, depending on the hand) should be increased.

Additionally, the face shouldn’t be open. Keep in mind that this will take a lot of practice. Still, mastering a draw shot is a valuable skill. It will work in most cases where a fade shot would increase your handicap.

Should You Go for a Fade or a Draw?

To be honest, you should be focusing on the one that you are able to do with the utmost perfection. The main difference is that a draw will produce a longer shot and probably go through the air without as much slice. On the other hand, a fade shot can be more precise, as long as you hit it the right way.

Why do we recommend focusing on one of these shots instead of practicing both the fade and draw? By dividing your practice session time, you will not be able to make as much progress as you would if only one shot was on your mind.

By mastering either the fade or draw, you will be able to eliminate one side of the golf course. This, you can increase your chances of hitting the target with the lowest handicap.

Turning a Fade Shot into a Straight Shot

The ability to prevent the gentle curve that is related to the fade shot is of great importance, especially if you are just starting out. In most cases, the cause of an unintentional fade is not that you are making mistakes in the swing path.

It is usually at the moment of impact between the club head and the golf ball. In order to prevent the clockwise spin from happening and ruining a straight shot, you will want the clubhead to be closed. We have just the perfect drill for this purpose.

For this exercise, you will not need a golf ball. Instead, you should use a headband or a wristband. Put it on the ground in front of your front foot and position yourself in a common golf stance. Our recommendation is that you use a 6 or 7-iron, as they offer the best potential of making a straight shot.

The idea is that you hit the headband or wristband with the top of the clubhead. To do this, you will need to adjust your left and right forearms, turning so that the face is square at the moment it makes contact with the object.

Make sure that, as you follow the swing through, you close the clubhead to the left. You should repeat this drill a couple of times before moving on and replacing the headband with a regular golf ball.

Last but not least, we have a couple of tips on how to make the most out of your fade shot. As we mentioned above, once you are able to do it on command, the hazards that are placed on the golf course will not concern you anymore.
The first drill is to make an alteration to your body position by aligning the shoulders and hips slightly to the left.

This is if you are a right-hander, so the opposite is true if you are left-handed. Along with this, you should make sure that the clubhead is open and aiming at the target. Once you are in the correct position, move on to performing a regular golf swing.

Your body alignment, as well as the clubface aim, should provide enough of a clockwise spin for the ball to land at the desired point.

The other method is that your body, as well as your feet, should be directly aimed at the target. The same is the case with the clubhead. At the moment of impact, make sure that the clubface goes a bit off and thus promotes a turn from the left to the right.

The fade shot carries a huge potential, especially if you are playing at a golf course that features ponds, trees, overhanging branches, and bunkers. Still, it is one of the trickiest of all golf shots, which is why many players suffer from either a weak or an unintentional fade.

We hope that the aforementioned tips will help you improve your mechanics and ensure the perfect, gentle, left-to-right curve. Good luck!