Driver Swing vs. Iron Swing: What is the Difference? 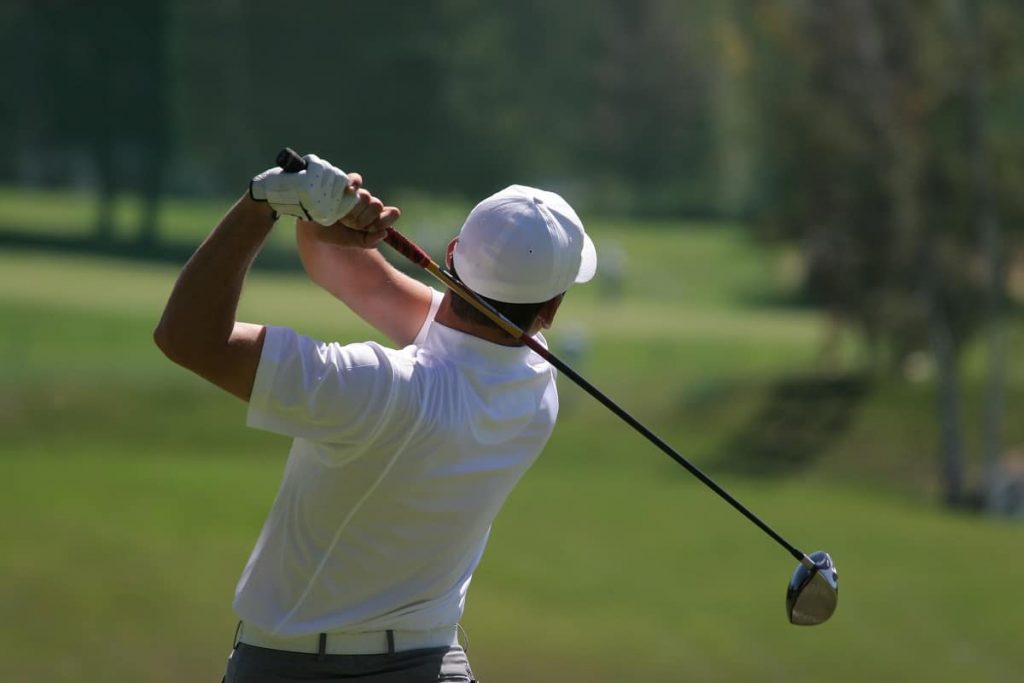 If you are looking to finally learn how to get that perfect swing with a driver and, subsequently, kick-start your best golfing experiences, this article provides the necessary guidelines on how to do it.

Based on statistics, it is clear that a great majority of amateur golfers are unable to use a driver to consistently make powerful, straight strokes. Some get close to getting it right, but they might just be missing a few tips that would help them be good to go.

There are a variety of elements to consider as far as golf is concerned. These are factors that, when looked into, will result in getting lower scores. However, only a rare few of these elements will satisfy you as a golfer as much as outdriving your partners.

In golf, hitting the ball long distances does not necessarily imply that you will automatically break 80. Many are able to make long drives but are not able to shoot in the 70s no matter how hard they try. For every 300-yard bomb, there are a lot of pop-ups, skulled shots, and worm-burners, as well as tops.

However, if it is within you to bomb deep drives, your game will be made a lot easier. This is even more true if the modern-day tough golf courses are available to you.

It might be worth mentioning that it is fun to practice hitting drivers. Are you prepared to begin shooting lower scores? You can achieve this by getting set up with easier approach shots. This article will be helpful in that regard as well. It will not only teach you how you can correctly use a driver, but it will also equip you with tips to add distance, as well as the best ways of keeping it straight.

Difference Between Hitting With a Driver and an Iron

When compared to your irons, fairway woods, and edges, your driver is a whole new animal, but a majority of golfers out there fail to hit very far or straight with their drivers. Why is this?

The reason is simple — they fail to consider the differences. However, it becomes easy for you to get on board after understanding the reason behind needing to make some adjustments.

One thing that I am certain of is that, if you’re like most golfers, you want to outdrive your golf partners and wedge better on the greens. Below, you will see three ways in which your driver differs from the rest of the clubs in the bag.

It is Much Longer

Your driver is the longest club in your bag. Conventionally, a standard driver is typically 45 inches in length, though some manufacturers may make them a little longer. Comparatively, the standard 5-iron is slightly just above 38 inches.

The length difference is significant because you now have a longer swing and greater distance between you and the ball. This will change your attack of angle and also the impact position. It is worth mentioning that a longer swing, greater speed, and less loft implies more misses. With all other factors constant, the margin for error is greater when using your driver versus your irons.

Using the Driver Off the Tee

A significant difference also comes in that you hit your driver off the tee. Though it is possible to hit it off the deck, it is not something I would recommend for you as an amateur golfer. Very few pro golfers even think of using a driver off the turf.

Importance of Hitting Off the Tee

Hitting off the tee is important since your position of impact is completely different. With irons, woods, and wedges, to create a divot, you want to hit down on the ball. However, as you might be aware, you do not want a divot with your driver.

With the driver, you instead want to hit the ball during the upswing. The aspect of teeing up your drive allows the club to approach the ball in a sweeping upward motion. This is essential in that it significantly affects your tee shots’ attack angle.

What is Attack Angle?

The result of this are the divots you get with irons and wedges, and almost zero divots with fairway woods. How well you strike each shot is determined by your attack angle. With a driver, your tee shot should have a positive attack angle. This helps in launching the ball into the air off the tee.

Between attack angle and handicap, there exists a direct correlation in amateur golfers driving the ball. On drives off the tee, scratch golfers are near zero whereas bogey golfers have an angle of attack of minus 2.1 degrees on tee shots.

Essentially, players with fewer skills hit down on the ball, whereas those who shoot in the 70s strike directly on the ball. The target is hitting the driver during upswing, as this results in maximum ball flight, which translates to more carry and distance.

Don’t overthink the situation here. One thing you need to know is that using a driver versus an iron doesn’t require a completely new swing. As a matter of fact, all you need are a few adjustments in your setup that will account for the teed-up ball and the length.

With few exceptions, the average golfer tends to make better shots when they use an iron as opposed to andriver. The reason behind this is that maintaining the iron’s shorter shaft on the right inside-out plane is easier.

Problems arise when you, as a golfer, try to drive using the same swing that was used for your irons. Significant improvements can be realized in your strokes by understanding how an iron swing differs from a driver swing.

If you want to bomb your drives, no other club in the bag can rival the big stick in terms of preference. From its longer length and much less loft, a considerable number of changes are needed compared to other clubs, even more so during setup.

Many amateur golfers make the mistake of not teeing it up high enough. Bear in mind, hitting a drive pure and deep requires you to hit up slightly under it. This is significantly harder with the ball teed up too low. Teeing it high will not lead to sky balls. A bad sky ball is the result of hitting down on the ball.

Given the longer length of the club, you need a wider stance for balance throughout your swing. You only need to widen your stance slightly so that your feet are positioned wider than the shoulders. Position both feet open slightly to allow you to get more turn and activation of your lower body.

It will be very much easier to get into the reverse position with a wider stance. This will also increase your accuracy, as there will be no need to swing longer to hit farther.

Ball Position Should be off the Front Foot

Positioning the ball directly between your feet will lead to you mostly hitting down on the ball. The outcome of this is that pop-up you dread. Ensure that the ball is positioned in front of your stance off the front foot. You may also think of it as directly below the left ear for a right-handed player and vice versa for a leftie.

Having the ball moved slightly forward makes it possible for you to hit upon it, getting even greater distance.

Hands Set Back at the Address

Using irons and wedges requires that you attain a slightly forward press at the address. This allows you to compress the ball, making perfect contact. To use an iron, the ball position should be at the center of your stance for wedges — half an inch towards the left for every longer iron.

With a driver, however, you want your hands to be slightly back. This will be essential in maintaining loft through the entire swing, while at the same time avoiding backspin that tends to produce shorter drives.

Adjust your Attack Angle by Tilting Your Shoulders

A crucial tip is for you to have your shoulders adjusted at the address since the ball is teed up. Your back shoulder should be positioned lower than your front shoulder. You need to do this to directly hit the ball. With off-the-turf shots, your shoulders should be kept level. Otherwise, your swing will be behind the ball, thus chunking it. The spine should be slightly tilted to the right for your driver.

Remove Tension from Your Arms by Gripping the Club Gently

Another adjustment you should make is lightening the pressure of your grip on the club. If you are a golfer who is no different from the others out there, you are likely familiar with the phrase, ‘grip it and rip it.’ In the practicality of it, having a tight grip on your driver tends to add tension to your forearms.

With such tension, it becomes easy to get off tempo at some point during your swing. You should instead try holding with as little grip pressure as you can. This will have a significantly positive impact on your game.

Other important points to note are as follows:

As you get started with your backswing while using an iron, you should focus on a point located under the golf ball. Through shifting the body weight from the back foot onto the front, and rotating your body towards the target during contact, you are able to generate power while using the shorter shaft of your iron. When you properly do this, a blast of sand from a bunker or divot of grass is generated from striking the point under the ball.

Using a driver off the tee, you elevate the golf ball off the grass by teeing up the ball. However, when you swing an iron, during the backswing your focus should be in the middle of the golf ball. Using an iron to swing as you shift your weight forward while rotating your body during contact results in the longer club being drawn off the correct inside-out plane.

As a result, you will probably be topping the ball, completely missing it, or slicing or hooking the shot. Rotating the body and shifting your weight as you swing a driver should only occur fractions of a second later compared to when you swing with an iron.

As you practice hitting drives, your concentration should be on keeping your weight back as you make the downswing. Let the club’s swinging momentum dictate body rotation and weight transfer. All tendencies to swing hard at first should be resisted, as this affects your accuracy. You realize that a driver’s longer shaft, together with the head size and weight, makes it possible for you to make accurate drives with fluid swings.

If you get yourself properly set up, your driver and iron swings should be basically the same. In both the swings, there is the application of the fundamentals of the backswing, takeaway, weight shift, shoulder and hip turn, head movement, and spine angle.

The main difference between the swings is the position of the ball, together with the ball being placed on a tee, and altering your hands’ position and your shoulder angle at address. Now that you know the difference, you can practice each appropriately to better your game.