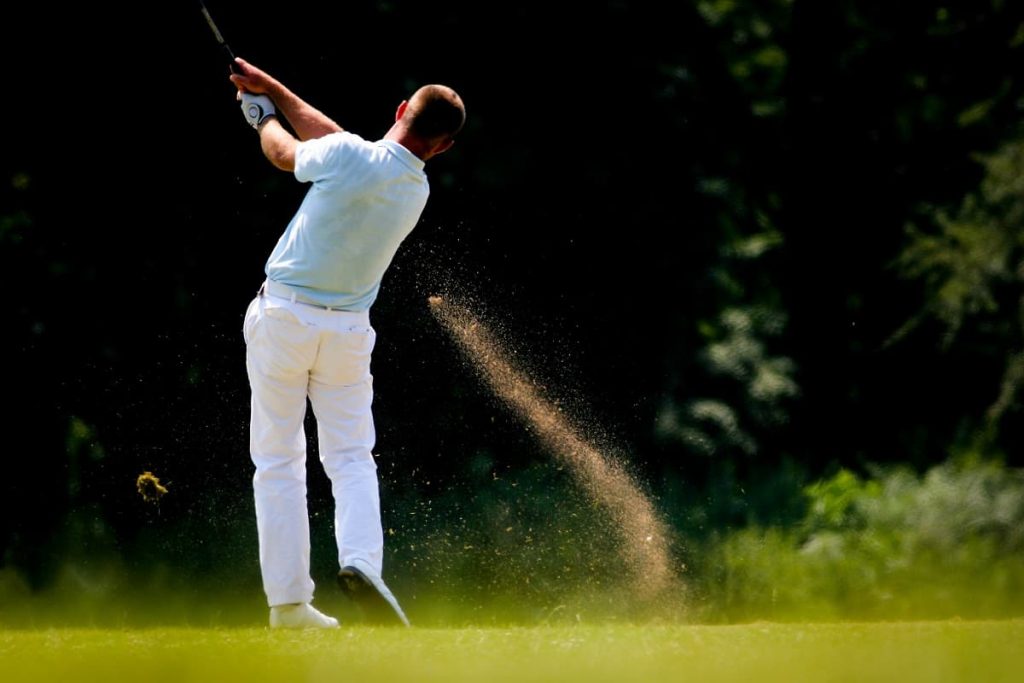 The two swings have fewer differences compared to what they have in common. They all have the same combination of hips, legs, arms, and shoulder reactions to impacting the momentum of the ball from the ground.

Swinging is all about timing and the combined factors to initiating the impact of the ball from the swing force. The swing force mainly connects all the different moving parts of a player into one motion.

Want more consistency in your game? Check out the Stress-Free Golf Swing.

Is There Any Difference Between a Baseball Swing and Golf Swing?

The answer is yes — there is a recognizable difference between the two swings. The significant difference is that the baseball swing is parallel to the ground because the baseball itself is seen to move in the air once hit.

On the other hand, a golf swing is perceived to be stationary towards the ground. The swing itself is diagonal, and it is carried out on a tilted plane on the ground. Even though many people would conclude that the two swings are the same, the thing is they hold a difference in how they are performed.

Hitting a baseball is an athletic motion, the swinging motion around your body; a golfer, while hitting the ball with a club, has a slight difference to that of a baseball swing in the air.

You have identified major differences seen between the two swings. But did you know that they are quite similar at some point? This is how they correlate with each other.

Both the golf swing and baseball swing are seen to be similar in the same hand, and arm and they exhibit almost the same swing motion, which later produces ball flight in both cases. The baseball swing doesn’t affect how you can best take your golf swing shot.

Another similarity is the footing. A baseball player who is eagerly waiting for the ball is set with their back foot in place, ready to take action once they hit the ball. On the other hand, golfers swing back, raising the hip to the top to initiate the backswing loading at their back foot.

In both cases, the golfer and a baseball player have a finite turn, and both the club and the bat are seen above their hands with their eyes focusing on the ball ready for a shot.

Both are similar in that the forward swing initiated to hit the ball begins with the lower body. This leads to weight transfer on the downswing. That being a general term, the real similarity is that both the golf swing and the baseball swing involve arm rotation. Both arms are extended during the impact.

Last but not least is that the impact caused by their variations during the release will tend to cause the same ball flight. That is, the force impacted will determine how the direction of the ball in flight.

Can Your Baseball Swing Affect Your Golf Swing?

This is one of the frequently asked questions when it comes to the comparison of the two. The question is answered by following the following factors.

How Do You Balance a Baseball Swing and a Golf Swing?

This is not simple for an individual who is both a golfer and a baseball player. But to make sure that your baseball swing is not affected by your golf swing and vice versa, you need to consider a number of facts.

Why are Baseball Curves Less Than Golf Balls?

This results from the baseball bat being round, and the face of the golf club being flat. The thing is, the flat hitting area of the club face and the act of over-rotating during the impact will bring about more spin and curve to the golf ball.

As small as golf balls are, they are known to cover a more considerable distance than baseballs. Hitting the ball straight will increase the squaring up of the club face to the aiming line once hit.

Although swung on different planes, a baseball swing and a golf swing have quite a lot in common. Just like the club face, the same place which the bat impacts is the same place the ball goes.

The swings are quite similar in that if a baseball player has a good baseball swing, they can apply the same principles in golf to make incredible shots.